Long-time Country Life presenter, Susan Murray, is this year’s Ravensdown Agricultural Communicator of the Year.  This was announced at a dinner in Hamilton on Wednesday night (12 June), when she was presented with a trophy and a cash prize. 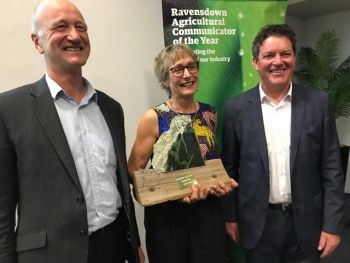 This is the 33rd year the Agricultural Communicator of the Year title has been awarded, and is the third year of involvement by sponsor Ravensdown.  This year there were six people from around the country and across a wide sector of agriculture and agribusiness were nominated, and the decision was reached by a panel of 10 judges from around the country.

This year is, Susan thinks, the 31st time she has covered National Fieldays and it will be her last. She recently resigned from RNZ, and she is looking forward to spending more time with her Mt Maunganui based husband (a senior manager at Zespri).  And she wants to be able to give time to their orchard and keeping her large garden under control. Susan is pictured right (centre) after receiving the magnificent trophy from Ravensdown's Bruce Wills (left) and Bryan Inch.

However, she hopes to be able to go back and do the odd news/ rural shift if ever they need it, but for now she really wants a break.

Susan is a life member of the NZ Guild, was secretary/treasurer for about ten years, has won many national journalism awards, and won the IFAJ Star Prize for Broadcast Journalism, an international award, several years ago. She was part of the planning team for the extremely successful 2015 World Congress of agricultural journalists hosted by the NZ Guild held in Hamilton

Elaine congratulated this year’s winner, Susan Murray, who she said was a clear winner ahead of a very strong team of nominations.

More about the award here ...