Ravensdown Agricultural Communicator of the Year 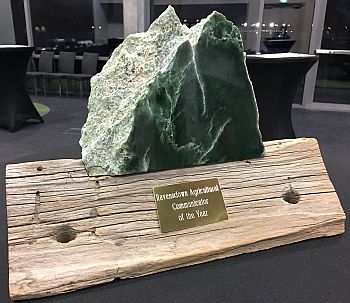 This prestigious award sponsored by Ravensdown, recognises and honours people or groups who have made major contributions to the agricultural sector by communicating relevant and important information to the sector or about the sector. Those nominated do not have to be Guild members (though people nominating them must be), but they must be someone who has done an excellent job communicating with or to the rural sector, or on behalf of the rural sector.

Ravensdown chief executive, Greg Campbell, says, “New Zealand’s primary industry is made up of a diverse bunch of sectors, from scientists to teachers to farmers and everything in-between, all working towards a common goal of being the world’s best and most sustainable producer of food. There are significant challenges and innovations that these people deal with and those stories and learnings need to be told. That’s why Ravensdown wants to champion those talented communicators who do just that.”

Nominations now open for 2022 Ravensdown Agricultural Communicator of the Year

We've now opened nominations for the 2022 Ravensdown Agricultural Communicator of the Year.

The recipient of this prestigious award will be announced at a reception at Fieldays on Wednesday 30 November.

We highly recommend in your nomination that you provide as much detailed information as possible on why you are nominating this person. Because of the broad composition of the judging panel, there is a good chance some of the ten judges may not know the person you are nominating. Therefore, the quality of the information you provide to support your nomination is almost as important as the contributions made by the person being nominated.

Rural personality and farming advocate Craig ‘Wiggy’ Wiggins was last night announced as the 35th winner of the Ravensdown Agricultural Communicator of the Year award.

Craig Wiggins is a passionate farmer, horse trainer, commentator, announcer, and MC based near Ashburton. In recent years, he has become famous in rural communities for Whatever with Wiggy, a weekly Zoom forum for farmers to engage with industry leaders and politicians to discuss issues of importance to the agricultural community.

Craig was a leading organiser and facilitator of the Agri Connect rural mental health seminar, which taught attendees the tell-tale signs of mental strain and where to direct farmers for help.

Jackie Harrigan, President of the New Zealand Guild of Agricultural Journalists and Communicators said Wiggins was a deserving winner because he had facilitated much needed discussions within the agricultural sector – much of it in a voluntary capacity – and kept political and industry leaders appraised of the mood on farm.

“Whatever with Wiggy has been an invaluable communication platform for members of the agricultural community, especially during the Covid-19 lockdown and restrictions when many were feeling isolated and overworked.”

View the photos of the awards evening here.