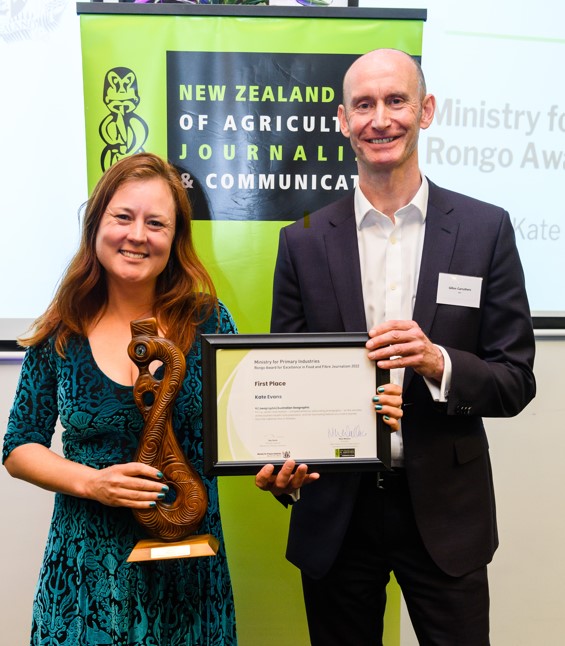 One of the stories took the photographer seven years to shoot. Over that time, southern bluefin tuna populations went from being critically endangered to making a dramatic recovery, so instead of being another extinction story, Kate’s feature detailed a rare example of science and good governance turning a cross-border fishery around. Along with an interview with Francisco Blaha, an Argentinian New Zealander tuna fisherman these two  won the Ministry for Primary Industries Rongo Award recognising excellence in agricultural journalism for its originality, exceptional storytelling, and depth of quality research. This was the 50th year of the Rongo award being awarded.

Runner-up in the Rongo award was an entry from Anne Lee for two articles in the Dairy Exporter special feature on contract milking.

The Pāmu Agricultural Journalism Encouragement Award, established to recognise the work of journalists who are new to specialising in agricultural journalism, went to Shawn McAvinue, for items which appeared in Southern Rural Life on Peter Black fetching top price at his last ram sale, eradicating diseases in the beekeeping industry and a celebration of a planting project on the banks of the Pomahaka River.

The 2022 were announced at an awards dinner in Wellington. A total of 14 awards were presented; 11 for journalism, a new award for digital story-telling, one for communications, and one for photography. Judges for each category came from a range from professional backgrounds, from established journalists to industry leaders.

The newest category, the OverseerFM Digital Storytelling Award, which was created to recognise the importance of excellence in telling stories digitally that share a picture of a future state in farm planning, went to Perriam Media & Sarah's Country for work with Ministry for the Environment on Freshwater Farm Plans & Intensive Winter Grazing, and a three-part podcast series on Sarah's Country called Table Swap.

The Primary Sector Communications Campaign Award, sponsored by the New Zealand Guild of Agricultural Journalists and Communicators, was went to Perriam Media, for work with the Ministry for the Environment for their collaboration on Sarah's Country's 'Table Swap'.

President of the New Zealand Guild of Agricultural Journalists and Communicators, Neal Wallace, said, “For 20 years our awards have celebrated professionalism and excellence in agricultural journalism and photography. Agricultural journalism highlights the importance of not just food and fibre production to all of New Zealand, but the rural communities and people behind the stories. It is critical in telling the stories and giving a face to the issues and challenges facing the sector’.

All the winning entries will be published on the NZGAJC website at www.nzgajc.org.nz

The New Zealand Guild of Agricultural Journalists and Communicators was established in 1958 as a professional membership society for those working with a focus on agriculture.

Members of the NZGAJC are writers, broadcasters and communicators of work relating to this country's primary production sector, which contributes around two-thirds of the nation's exported goods and is a major regional employer.