2017 Ravensdown Agricultural Communicator of the Year is ... 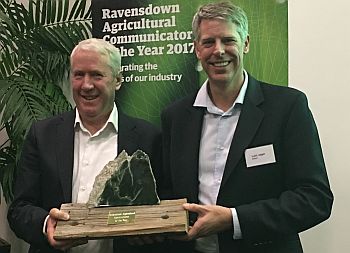 The chief executive of Zespri, Lain Jager, is the winner of the 2017 Ravensdown Agricultural Communicator of the Year. This was announced at a dinner in Hamilton tonight, when he was presented with a trophy and a cash prize.

Lain (pictured right receiving his award from Mike Manning, Ravensdown general manager innovation and strategy) has served as Zespri CEO since 2008, having joined the company in 1999.  In his time with Zespri, global sales have increased from just over $500 million to $1.9 billion in 2016/17, with $1.1 billion of that returned to communities around New Zealand.

He has an open, accessible and direct style of communication, was nominated for the Business Herald Business Leader of the Year in 2015, and the Rural News editorial team also acknowledged him earlier this year as the top leader in the agribusiness sector in its 2016 in Review.

Lain’s understanding of complicated information and the way he can make this accessible to a wide range of audiences makes him an outstanding communicator.

He is very generous with his time, addressing forums such as the Kelloggs Rural Leadership programme each year, Bay of Plenty Export Awards, monthly CEO video updates to all Zespri staff and even jumping out of a plane for the Drop Your Boss charity drive.

This is the 31st year the Agricultural Communicator of the Year title has been awarded, and is the first year of involvement by the new sponsor Ravensdown, after 30 years of sponsorship by Landcorp. This year there were seven people nominated and the decision was reached by a panel of 10 judges from around the country.

Confirming the award sponsorship late last year, Ravensdown chief executive Greg Campbell said New Zealand’s primary industry is a diverse group of sectors, all working towards a common goal of being the world’s best and most sustainable producer of food.

“There are significant challenges and innovations that these people deal with and those stories and learnings need to be told. That’s why Ravensdown wants to champion those talented communicators who do just that.”

The award is administered by the New Zealand Guild of Agricultural Journalists and Communicators and recognises excellence in communicating agricultural issues, events or information.

Guild president Ali Spencer said the Guild was delighted to partner with Ravensdown in offering this long-standing award, which recognises excellence in communicating agricultural issues events or information.

“There was a range of high standard nominations from our members this year, but, for our judges, Lain stood out as most excellent primary sector communicator in 2017. We salute his skills and knowledge, and congratulate him on this award,” she said.

She also congratulated him on his decision to donate his prize money to the Child Cancer Foundation.